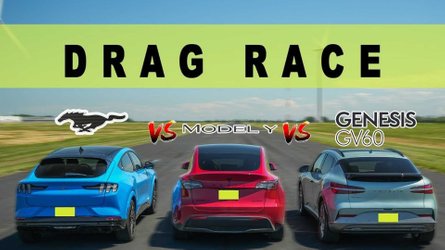 If you’ve been following the segment for some time now, you probably remember when EV drag racing was all the rage. Love it or hate it, it was popular primarily due to Tesla’s models and their instant torque and ludicrous acceleration. Now that a long list of compelling electric cars and SUVs have come to market, it’s time to put them to the test and prove that most EVs boast torque and acceleration like many drivers have never experienced before.

Perhaps now that most automakers have brought impressive EVs to market, a wide variety of shoppers are becoming more interested in the segment as a whole, and the cars’ strengths across the board, rather than just focusing on whether or not they “accelerate like a Tesla.” We’re here to tell you that there’s a lot more to like about EVs than their instant acceleration, but we’re also here to share that virtually any EV you choose will likely wow you with its performance.

With all of that said, the video above, published by YouTube influencer Sam CarLegion, pits the popular Tesla Model Y against one of its closest rivals, the Ford Mustang Mach-E. Of course, we’ve seen this matchup before, though this video features the Mach-E GT, which takes things to the next level. However, we were even more excited to learn that the video also features the all-new 2022 Genesis GV60.

The Mustang Mach-E GT features a dual-motor all-wheel-drive setup that makes 480 horsepower. The Model Y in the video isn’t the range-topping Performance version, but it does come with two motors and all-wheel drive. In fact, in the US, you can only get the dual-motor versions of the Model Y. Sam CarLegion says the Model Y makes 384 horsepower.

The Genesis GV60 also comes standard with a dual-motor all-wheel-drive powertrain. It produces an impressive 483 horsepower, but only with its “Boost Mode” feature. It’s time to place your bets ahead of pushing the play button.

Once you’ve had a chance to check out the short video and see the results, scroll down and leave us a message. Did the drag race end as you expected? Which EV did you guess would be the winner?