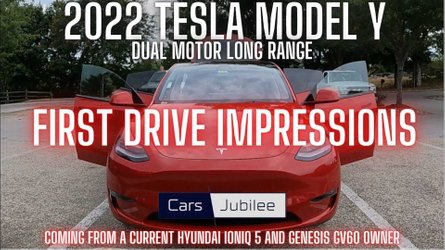 This guy is a proud and happy owner of both a 2022 Hyundai Ioniq 5 Limited with all-wheel drive and a 2023 Genesis GV60 Performance. However, he’s been trying for years to get some time behind the wheel of the Tesla Model Y, and now, his time has come.

The Tesla Model Y is the most popular EV on our shores, and it isn’t cheap. The “base” model in the US starts at about $66,000. It comes standard with a dual-motor all-wheel-drive system. If you opt for the range-topping Performance version, you’re looking at a minimum of about $70,000. The Model Y has an EPA-estimated electric driving range of up to 330 miles.

The Hyundai Ioniq 5 is considered a more budget-friendly alternative to the Model Y, but the top-of-the-line Limited model still starts at about $51,000. Hyundai charges about $4,000 to add the dual-motor all-wheel-drive powertrain. While $55,000 is a big savings over the  Model Y, the Ioniq 5 is likely still out of reach for many car shoppers. The Ioniq 5 has a range of up to 303 miles, though the Limited with AWD is rated at 256 miles.

The Genesis GV60 starts at around $60,000, and the Performance model will set you back around $70,000. According to the EPA, the GV60 Performance offers 235 miles of electric range.

At any rate, the host of the YouTube channel CarsJubilee says he tried to get a Model Y on a few occasions in the past, but it didn’t work out as planned. He adds that this video is honestly his very first time “EVER stepping foot in the Model Y.” The EV owner takes us along on his maiden voyage to share not only his impressions of Tesla’s popular electric crossover, but also how it compares to his current electric vehicles.

Interestingly, the reason CarsJubilee ended up with the 2022 Tesla Model Y Long Range was due to damage to the Ioniq 5. A rock cracked the windshield and sunroof, so he rented a Tesla to drive while the Hyundai is being repaired.

The video is short and to the point. CarsJubilee simply drives the Model Y and reports on it as the drive unfolds. There’s a lot of key information provided via large text at the top of the screen, which makes it easy to follow. At this point, we’ll leave you to check it out, but don’t forget to head back down here and share your takeaways and opinions after you’re done watching.