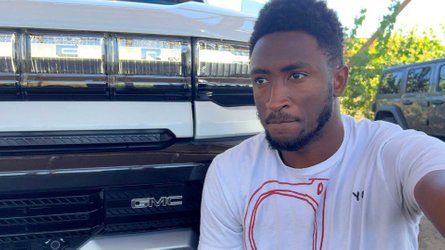 Famous tech YouTuber MKBHD (aka Marcus Brownlee) was recently given a GMC Hummer EV for a week. During that time he had the chance to find out what the 9,063 lb pickup was like to live with on a daily basis.

MKBHD first mentioned the Hummer EV’s weight. It equates to roughly three Honda Civics and features a ginormous 212 kWh battery pack. Its sheer mass means it’s actually not allowed to drive down some roads, with it being in the same weight class as a semi-truck in certain areas. Finding parking can also be a challenge, you’ll often be very close to at least one car on either side of you.

The GMC Hummer EV unsurprisingly has plenty of storage space. Although not as big as the F-150 Lightning’s, its front truck (or “frunk”) is still massive. MKBHD noted how he can fit three or four duffel bags in it. The 5-foot long bed is competitive with rivals and features plenty of sockets and even a speaker.

Inside you certainly notice the Hummer’s size, with its remarkably wide cabin and thick doors. The infotainment system is super responsive, meanwhile you get plenty of physical buttons. There are also lots of cool graphics in each menu, which shouldn’t come as a surprise given the Hummer EV’s software was developed by Epic Games. Rear passengers get loads of leg room meanwhile the removable glass panels are a nice feature.

The Hummer EV feels like a normal pickup truck to drive, although it accelerates insanely fast (0-60 mph takes 3 seconds). As a result of its massive weight, there’s a lot of tire noise according to MKBHD. One-pedal driving works well and the rear-steering allows for a surprisingly impressive turning circle. Crab-mode does what it promises, although you’d rarely need to use it.

MKBHD concluded that the Hummer EV is a great truck with lots of amazing features and 300 miles of real-world range. However he did admit that it’s a little excessive, and if you’re not much of an enthusiast and just want a solid all-around truck you’re probably better off paying half the price and getting a Ford F-150 Lightning.